Meet Lori Bentley Law @motordolls ! She is the mastermind behind the awesome NBC feature on Babes Ride Out 3.

We first met Lori at a gas station (duh). We were headed home from one of our many meetings in Joshua Tree and we were pumping our gas when we hear someone call out, “Hey, are you Babes Ride Out?” We both turned around and ended up chatting with Lori and her husband Brian about their Joshua Tree home and their Route 66 Motor Palace project, their fleet of motorcycles they own and all the other really cool things that this awesome couple has going on in their lives. Lori seemed so passionate about her love for motorcycles and cars and we wanted to know more……. 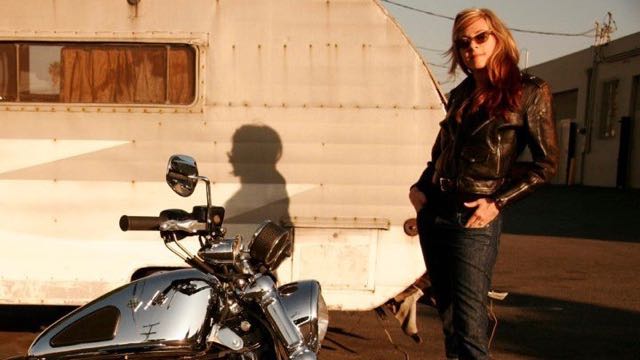 Besides my day job as an NBC photojournalist, I’m an author, with several novels under my belt—all involving girls and their relationships with either classic cars or motorcycles. You’d think I could write about my own, but wow. The first draft bored me—although, one element shone through. I hadn’t intended this article to be a love story about my Sportster; it simply became that.

Between writing, work, and our Route 66 preservation project (the Motor Palace–a future motorcycle shop/hangout) there isn’t much time for big events, gatherings, or group rides. I’m not antisocial or shy, just simply never do them.

Going to a mega-event like Babes Ride Out pushed me outside my social comfort range. Surprisingly, I loved it–flitting from group-to-group in my loner-like way, shooting the news segment for NBC, meeting tons of new people, eyeballing all of those amazing motorcycles. Wow. So many great bikes.

As I stared out over the vast scope of the B.R.O campground from the perch high above, something struck me: My Chromester glowed like a Vegas showgirl in a sea of deconstructed patina. Dang. Talk about being out of fashion. I wondered, after eleven years together, was it time to give this motorcycle a makeover?

Let’s go back to the beginning and explore.

I had this boyfriend in high school, Psycho Mike, who late one night after his mom died went into a rage, put me in front of him on a borrowed beat-to-crap sport bike, and took off up a mountain road. He had no experience riding and I’m pretty sure planned to kill us. Thankfully, he didn’t, but I swore I’d never get on two wheels again.

And then I met Brian, a lifelong, third generation motorcyclist. Even his grandmother rode. After a long country excursion on the back of his ’78 BMW R80/7, I fell in love with both the bike and the boy. In ’95, I got my motorcycle license, and in ’98 married the boy.

I’m damned stubborn when it comes to style and picked, for my first bike, one of the “worst motorcycles ever made” according to legendary Yamaha man Joey Brown who had the 1966 Yamaha YM1 in his motorcycle graveyard. He tried to talk me out of it, but I wouldn’t budge. He shook his head as he took my 300 bucks and said, “Just remember, I told you so.” 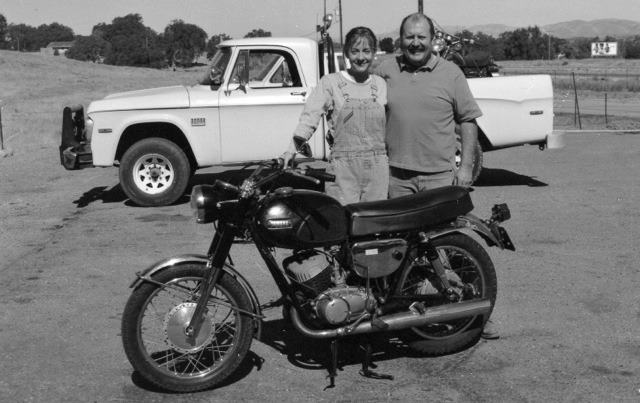 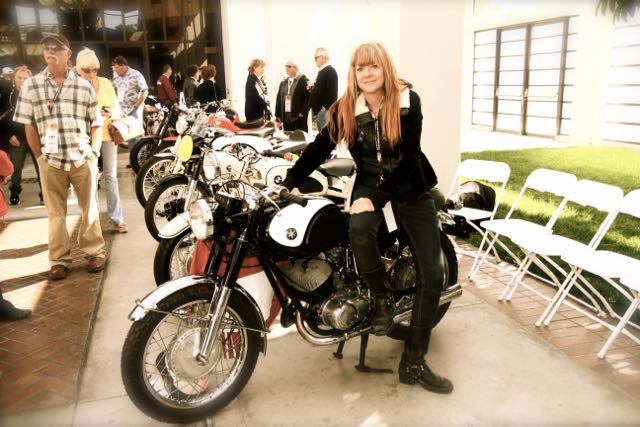 Twenty years later I still own that two-stroke, 305cc motorcycle. It has more hours of labor than all of our motorcycles combined (and we have a lot). Still, the bike has never made it more than about ten miles before something happens. Not exactly practical. Nor was the ‘77 Triumph Bonneville I could only sometimes kick-start. Or the plated ’76 Honda TL125 that shouldn’t be on the street (although man, what a blast on the dirt). 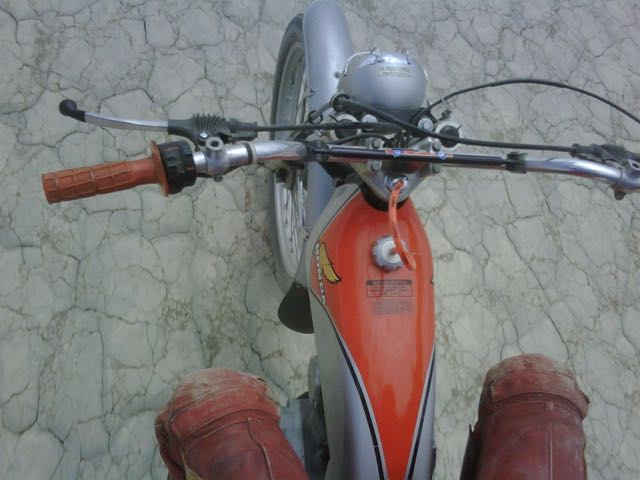 Nine years of impractical choices later, Brian had enough. In 2004, he bought me a brand new Sportster 1200R, whether I wanted it or not.

I let the motorcycle sit in the garage. First off, Harleys had never been my thing, and second, the bike felt SO top heavy.

He customized the Sportster anyway, enticing me with the kind of vintage features I loved, such as tank pads and fork gators. He chromed the tank like a BSA and added a 1955 Ford Thunderbird emblem. He made many upgrades, like RaceTech suspension, LRB brakes, and an hydraulic clutch.

Occasionally I took the bike out, but I wasn’t feeling it. As a compromise, Brian brought home a used ’04 Bonneville, with styling I liked and modern components–like electric start. 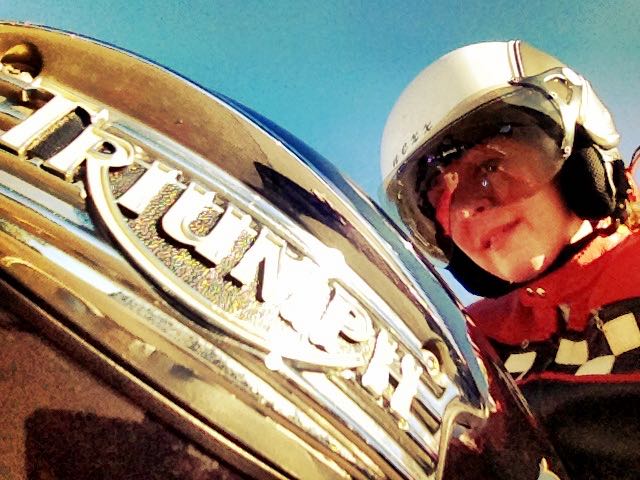 Still, Brian wanted me on the Harley. Finally I gave the bike an honest try. We headed out on a 150 mile ride to one of our favorite spots, Joshua Tree, and at last the Sportster and I clicked.

Over the ten years following that bonding ride, the Chromester has been the catalyst for some of my most memorable life experiences, like our three-week exploration of Route 66 from California to Illinois and then up to Wisconsin. The old alignments sometimes turned to dust under our tires, we often got lost trying to keep track of the road, but the Chromester never stumbled. Anyone who tells you touring on a Sportster is impossible doesn’t know what they’re talking about.

The trip did something to me. Changed my perspective somehow. Being on a motorcycle day after day, exploring and discovering, bonds you in a really dramatic way. My Sportster became a part of me during those three weeks.

So here I am now at the beginning of 2016, eleven years after first getting the Sportster, and contemplating a makeover.

Knowing this, Brian surprised me with a new Sportster tank for Christmas, a blank slate to customize at my will, as I did my ’48 Ford. At first, the idea excited me, but when I thought of deconstructing the Chromester, I got sick to my stomach. Fashion may come and go, but that motorcycle and I have too much history, too many miles, to simply make her over into something new. We have other bikes for that. Years from now, I want to sit on that beautiful machine and remember every mile, remember the thoughtfulness Brian put into designing her for me, remember every experience big and small, and cherish all of the adventures behind us and the ones that lay ahead. She and I can be old ladies together, blazing down the road, flaws and all, no makeovers needed.

So hey… anyone want to buy a brand new Sportster tank? Swell as the gift was, the Chromester won’t be needing it. 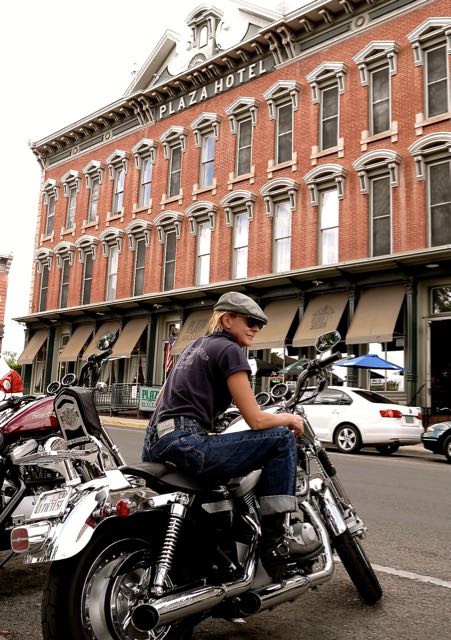 Many thanks to Babes Ride out for including me in their Roll Call.

This site uses Akismet to reduce spam. Learn how your comment data is processed.